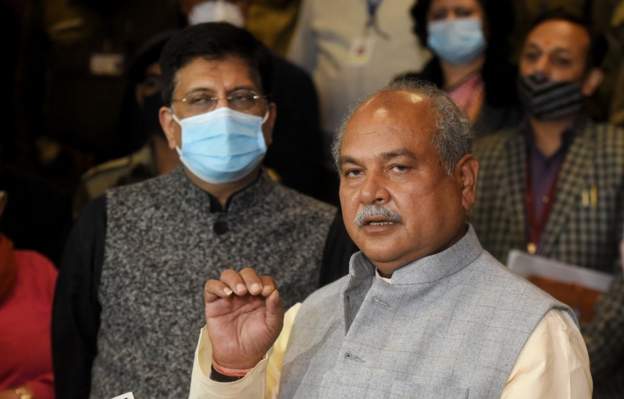 Agriculture Minister Narendra Singh Tomar said that the government is hopeful that a solution to the protests against agricultural laws will be resolved before the new year begins. He told in an interview to news agency PTI that informal talks are being held with various groups of farmers to end this crisis.

The Agriculture Minister said, “We are constantly talking with the farmers unions. Our effort is to reach a conclusion through dialogue with them. We are ready to negotiate. Informal conversation is going on. I hope to find a way out. ” The Agriculture Minister said that the Modi government is committed to address the real concerns of the farming community and is ready for formal talks at any time. But, there is no point in talking to those who are firing guns from the shoulders of others.

He blamed the opposition for misleading the farmers and accused them of changing their stand on the reform process and politicizing the issue. There is a situation of deadlock between the farmers and the central government regarding the agricultural laws and today (Saturday) is the 24th day of the farmers’ protests.

A large number of farmers are staging dharna on different boundaries of Delhi. Most of them are farmers of Punjab and Haryana. The government says that it is ready to negotiate with the farmers, but the farmers say that the talks are possible only when there is talk of canceling all three agricultural laws.

Earlier, the Agriculture Minister wrote an eight-page letter in which he gave information about the benefits of agricultural laws and mentioned the confusion being spread about it. On whether the committee set up by the Supreme Court will negotiate further and find a solution or the government will find a solution, Narendra Tomar said that the government has kept the doors of dialogue open with the farmer leaders and the government will wait for the order of the Supreme Court for the next step .

He said that the peasant unions should not insist on repealing the agricultural laws, which have been made for the benefit of the farmers. If they are successful in explaining their objection to each provision of the law, then we can consider making changes in the law. The Agriculture Minister said that the government is there to solve the problems of the farmers, but if they do not tell the specific problem then how will the government give a solution.

ALSO READ: Kejriwal asked center, “How many farmers do you need martyrdom?”

Narendra Tomar, along with Food Minister Piyush Goyal and Minister of State for Commerce Som Prakash, are leading the negotiations with about 40 farmers associations. To overcome the deadlock, at least five rounds of formal talks have been held between the three Union ministers and 40 farmers ‘unions, but the farmers’ unions are demanding a complete withdrawal of these laws.