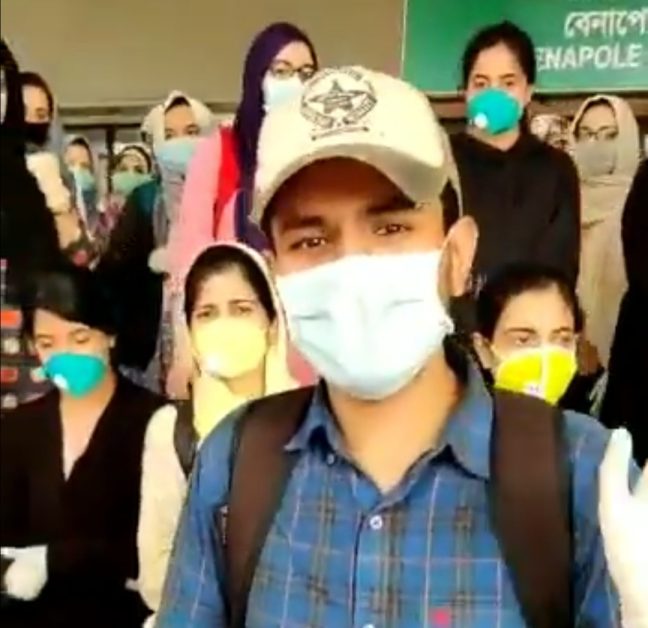 Number of Kashmiri students returning from Bangladesh amid Coronavirus outbreak have been left stranded at the country’s border with India, hoping the authorities would evacuate them.

Speaking to GroundReport.in on phone one of the student said “We were asked to vacate hostels by the college administration in Bangladesh. But, we were not allowed to enter Indian side and we are stuck at the border from past many hours,”.

As Government of India suspending all domestic airline services from March 25 amid the coronavirus outbreak in the country.students said they cannot go back to Bangladesh as they have already reached the Kolkata border.

“We can’t stay here as it is too risky. We appeal to the Indian government and the JK government to intervene into the matter and help us to reach our homes in Kashmir,” students said.

However Some Kashmiri students also held protest at Bengaluru Airport on Monday asking the government how they would return to their state. The Kashmiri students have requested the government to take them back to their home.
Upset with the suspension of the domestic flights by the Union Ministry of Civil Aviation, one of the Kashmiri students said, “We’ve booked tickets to Kashmir for flights scheduled on 27&28 March; now this order has been issued. What will we do now?” Shaheen Bagh Protest Site Cleared, Security Tightened Amid Imposition of Section 144 and Delhi Lockdown as COVID-19 Cases Rise.

Earlier on Monday, the Union government in a statement said that no domestic commercial passenger flight would be allowed to operate in the country from March 25 onward. The decision was taken by the Union Civil Aviation Ministry in order to restrict travel amid the coronavirus pandemic. The government had already banned international flights for a week from Sunday.

Apart from this, a total of 30 states and union territories were put under lockdown till at least March 31. The cumulative area put under prohibitory measures include 548 out of the 720 districts of India. The provinces where statewide lockdown has not been imposed include Uttar Pradesh, Madhya Pradesh and Odisha.

The three states have exempted certain areas from the restrictions. Among the union territories, Lakshadweep Islands has put certain restrictions. Till now India recorded 75 new cases of coronavirus, taking the overall toll of COVID-19 patients in the nation to 471. The fatality toll also jumped to 9.