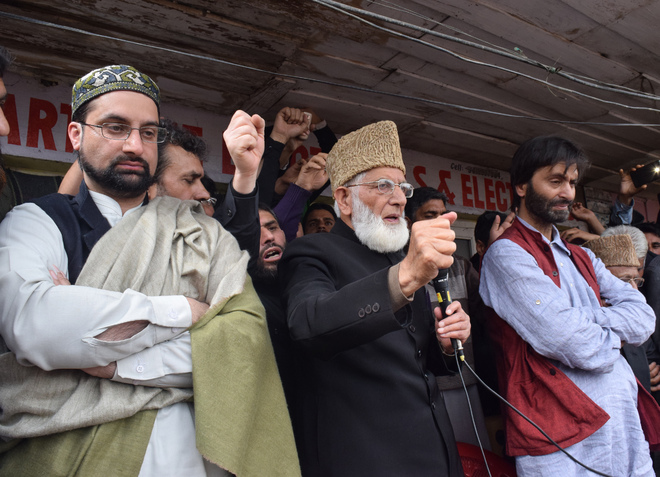 Ground Report | New Delhi: Hurriyat conference likely to be banned; The factions of the separatist group Hurriyat Conference, which has been spearheading the separatist movement in Jammu and Kashmir for over two decades, could be banned under the stringent Unlawful Activities (Prevention) Act, News Agency PTI reported.

Hurriyat conference likely to be banned

An official said that a recent investigation into the granting of MBBS seats to Kashmiri students by institutions in Pakistan indicated that money collected from candidates by some organizations was being used to finance terrorist organizations in the union territory.

ALSO READ: Who was Ashraf Sahrai, the imprisoned leader who died from covid?

Officials said both the factions of the Hurriyat are likely to be banned under the Unlawful Activities (Prevention) Act, or section 3(1) of the UAPA, under which “if the central government is of the opinion that there is an association, or is a non – becomes a statutory association, it may, by notification in the Official Gazette, declare such association to be unlawful.” He said that this proposal was made in line with the policy of zero-tolerance against terrorism of the Centre.

The Hurriyat Conference came into existence in 1993 with 26 groups, including some pro-Pakistan, and outlawed organizations such as Jamaat-e-Islami, JKLF, and Dukhtaran-e-Millat. It also included the People’s Conference and the Awami Action Committee headed by Mirwaiz Umar Farooq.

The separatist group broke into two factions in 2005 with the moderate group led by the Mirwaiz and the hard-line led by Syed Ali Shah Geelani. The Center has so far banned Jamaat-e-Islami and JKLF under UAPA. The ban was imposed in 2019.

Recently, the Counter Intelligence Kashmir (CIK) wing of the J&K Police arrested six persons including separatist leader Zafar Akbar Bhat and a woman from north Kashmir’s Baramulla in a case registered in July last year in connection with the alleged racket of selling Pakistan-based MBBS seats and of other professional courses by Hurriyat leaders and using part of the money generated for militancy.

CIK identified the arrested persons as Mohammad Akbar Bhat alias Zaffar Bhat, Fatima Shah, Mohammad Abdullah Shah, Sabzar Ahmad Sheikh, Altaf Ahmad Bhat, and brother of the brother of accused Zafar Akbar Bhat and Manzoor Ahmad Shah for “being a part of the inward and outward supply chains at one stage or the other and where credible evidence could be collected and brought on record.”

What is Hurriyat Conference

The All-Party Hurriyat Conference (APHC) was formed in July 1993, when militancy was at its peak in Jammu and Kashmir and there was speculation that it would be dealt with in the same manner as was done in Punjab, where the Khalistani movement was carried out. To neutralize

The group consisted of 26 groups, including some pro-Pakistan and outlawed organizations such as Jamaat-e-Islami, JKLF, and Dukhtaran-e-Millat, as well as the People’s Conference and the Awami Action Committee headed by Mirwaiz Umar Farooq.

The separatist group split into two factions in 2005 – Hurriyat (G) and Hurriyat (M) – along with the moderate group led by Mirwaiz and hard-line led by Syed Ali Shah Geelani.