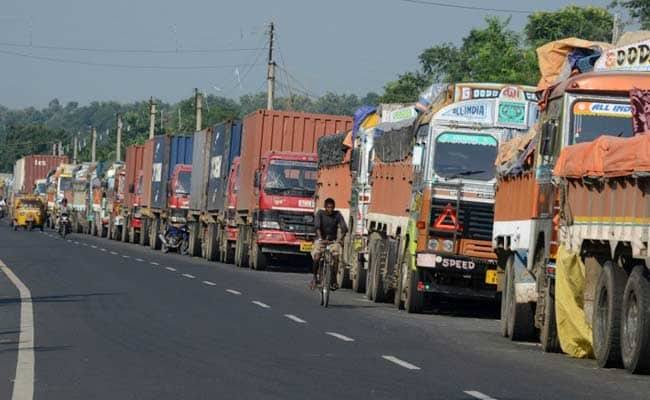 With no business activities in major fruit Mandis in Kashmir valley this season, truckers suffer huge losses during from August 05 after the abrogation of Article 370 and 35A besides divided Jammu and Kashmir into two Union territories Jammu Kashmir and Ladkah, Truckers are in that pushing position where they are not in a position to pay bank installments.

Danish Nazir, a truck driver from Kangan in Central’s Kashmir Ganderbal district said that he had purchased a truck in the month of July this year after investing his lifelong savings and a portion of amount financed by Jammu and Kashmir Bank, only with the hope to earn good payments in the peak season of apple harvesting.

“The plucking season is already at its peak, but farmers are not plucking the crop due to the prevailing situation in Kashmir, forcing all the truckers to stay idle at home rather than venturing for any load,” he said.

Abdul Rashid a Local truck driver from Budgam said “In our area alone (ImamSahib area), almost three dozen new trucks hit the roads this year, with the hope to earn a good revenue after witnessing bumper crop in the area”.

Currently, almost all the major fruit mandis in Pulwama and Shopian have been lying defunct since the day government of India revoked the special status of Jammu and Kashmir on August 5.

The apple growers here believe that the harvest of this cash crop was dragged deliberately to project the normalcy in current uncertainties; however, other agricultural activities have been going on normally.

“Everyone is suffering losses in Kashmir during these days, so are the truckers and there is complete silence in the entire area,”

All shops, business establishments, fuel refilling stations, schools are shut as Kashmir Valley is on edge since 5 August 2019, when BJP led government scrapped article 370 and article 35A besides divided the State of Jammu and Kashmir into two union Territories (UT) one is Ladkah and Jammu and Kashmir.

Communication blockage persisted for the consecutive 64th day across the valley, reports of shutdown also purred from other parts of Kashmir valley even mainstream parties like national conference and people Democratic Party with former chief minister Omar Abdullah and Mehbooba Mufti under detention.

However Ministry of Home affairs in a statement said that the situation in Kashmir valley is returning to normalcy with easy of restrictions.