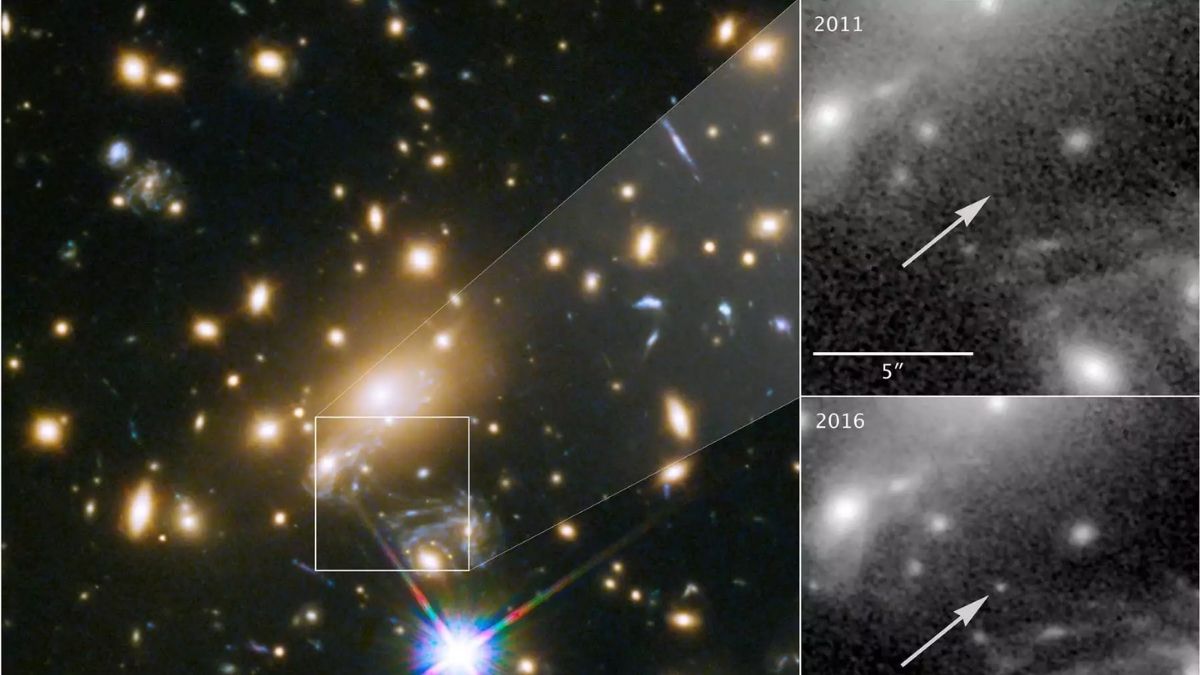 Ground Report | New Delhi: Using NASA’s Hubble Space Telescope, scientists have claimed to have discovered the most distant individual star ever. Scientists have dubbed the new bright star Earendel, an Old English word meaning “star of magic” because it existed at the beginning of the universe.

Researchers say that 28 billion light-years from Earth, the star is blue and extremely hot. It is estimated that this star is 50 to 100 times larger than our Sun, while it is millions of times brighter than our Sun.

The star’s light travelled 12.9 billion years before reaching Earth, which means that the star was present even when the universe was only 7% of its current age.

Arendal was born about 900 million years after the Big Bang in the beginning of the universe. It belongs to the earliest generation of stars at a time when the universe was very different from what it is today.

“This star opens a new window into the early days of the universe,” said Brian Welch, an astronomer at Johns Hopkins University in Baltimore.

Welch, the lead author of the study, which was published in the scientific journal Nature this week, added: The first light from the stars began to spread in the universe and when the first galaxies began to form.

Explaining the star’s name, Welch said researchers thought it would be nice to call the cosmic Dawn-era star “the star of magic.”

In a way, using Hubble as a time machine, scientists like Erendel are looking into the deep past to observe distant objects, such as Erendel, because the light from this star has come a long way to reach the Earth. Was

Explaining this, Welch said: ‘So usually when we look at distant objects, what we see is the light of an entire galaxy. In this way millions of stars have come together and we have been able to see them from afar. But thanks to a huge cluster of galaxies in the background, the light of this one star has now increased so much that we can see this single star from such a long distance.

The first images of Arendal were obtained by Hubble in 2016, and with the 2019 observations, researchers are hoping that it could be studied in more depth using the next-generation James Webb Space Telescope. The state-of-the-art telescope will be operational in a few months after its launch in December.

The longest recorded star before this was Icarus, which came into being four billion years after Arendal.

Arendal was probably very different from the stars that inhabited the universe today, as Welch said it probably contained mostly hydrogen and helium, which contained traces of heavy elements, including carbon, nitrogen and oxygen.

Welch said the first stars formed about 100 million years after the Big Bang, and that perhaps one or two generations of stars existed before Erendel was formed.

Welch said that although scientists on Earth could now see the star’s light, Erendel itself probably would no longer exist because such large stars have a relatively short lifespan. It existed for perhaps a few hundred million years before it perished after a supernova explosion.