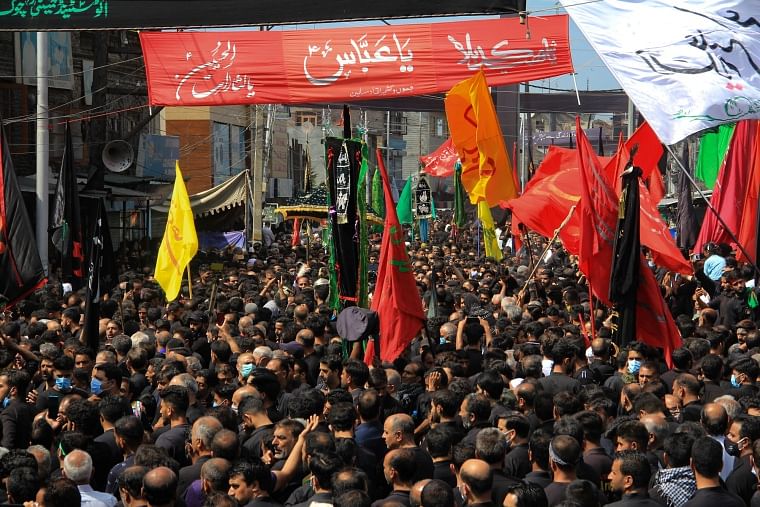 Ground Report | New Delhi: How Holy day of Ashura celebrated; Ashura is being celebrated with religious fervor in countries around the world. Thousands of small and large mourning processions are being held on this occasion.

This annual pilgrimage marks the 10th day of Muharram, the first month of the Islamic new year. Since the Islamic calendar is lunar, the day of Ashura varies from year to year.

How Holy day of Ashura celebrated

Millions of Shia Muslims around the world celebrate the holy day of Ashura, the beginning of a forty-day period of mourning and mourning known as Arbin, one of the holiest rituals of Shia Islam. Thousands gathered in the Iraqi cities of Karbala and Najaf, creating some spectacular images of religious ecstasy.

ALSO READ: Who is Ahmad Massoud, who open front against Taliban

Mourning rites also include the use of chains or knives to beat themselves and draw blood, a tradition known as “tatbir”. Major ayatollah around the area are repeatedly telling pilgrims to refrain from tatbir, some continue to do so.

The story of Muharram dates back to 13 centuries, which is associated with the events after the death of Prophet Muhammad.

After the Prophet’s death in AD 632, a dispute arose over who would be the successor to the leadership of the Muslim community and the title of Caliph, or “Deputy of God”. Most Muslims supported Abu Bakr, a close companion of the Prophet, to become the first Caliph. A minority wanted Ali, the Prophet’s cousin, and son-in-law. Those who supported his claim were later called Shia Muslims.

Even though Ali was not made caliph, Shia Muslims considered Ali as their first imam a leader appointed by God. The title of Imam would be given to his sons and his descendants. Political leadership remained largely out of the hands of Shia Imams. He would not be the Caliph, but the Shias became convinced that their Imam was the only true leader to be followed.

By the time Ali’s second son, Hussein, became the third imam, the division between the caliph and the imam had deepened. In 680 AD, during the holy month of Muharram, a caliph of the Umayyad dynasty, Yazid, ordered Hussein to pledge allegiance to him and his caliph—a dynasty that ruled the Islamic world from 661 to 750 AD.

Hussein refused because he considered Yazid’s rule unjust and illegitimate. His rejection resulted in a 10-day heavy standoff at Karbala in modern-day Iraq between the larger Umayyad army and Hussein’s smaller band, which included his half-brothers, wives, children, sisters and closest followers.

However, Muslims of Jammu and Kashmir observe Ashura, the 10th day of the holy month of Muharram, with religious fervor on Thursday, marking the martyrdom of Hazrat Imam Hussain (AS), the grandson of Prophet Muhammad (SAW), while Shias mourn The people took out a procession. Srinagar, Budgam, and other districts concluded peacefully.

On the 10th of Muharram, Hazrat Imam Hussain (AS) along with 70 other members of his family and companions were martyred in the battle of Karbala in Iraq. His martyrdom is celebrated around the world, with Shia mourners taking out huge processions amidst chest-thumping and recitations of praise for Imam Hussein (AS).

Similarly, Muharram processions were taken out in Budgam district, Pattan, and Delina areas of Baramulla district, Wularhama Pahalgam, Sofi Pora, Halkha, Chaturgund in South Kashmir today in which thousands of people took part and paid homage to the martyrs of Karbala.

In addition, Sunni Muslims also organize Ijtima in local mosques on the occasion, during which religious clerics gave speeches and highlighted the events in Karbala.