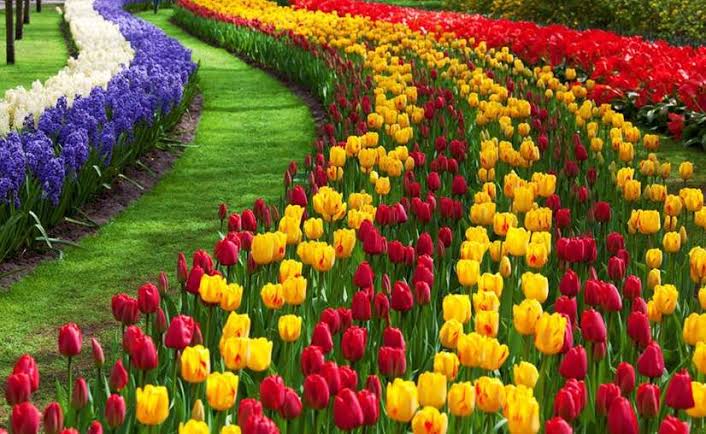 For the first time, over 15 lakh flowers will bloom at Srinagar’s Indira Gandhi Memorial Tulip garden, which will be thrown open on March 25.

“The garden will be thrown open on March 25. Over 25 percent flowers have bloom so far. We expect more people will visit this year than previous years,” Rafiq told news agency Kashmir Indepth News Service (KINS).

In the previous years, less than 12 lakh flowers comprising of 50 various would bloom. This is for the first time when 15 lakh flowers will bloom at the Tulip garden.  Around 15 new varieties have been added this year.

An official said Floriculture Department is also going to organize eight days festival at Tulip Garden in collaboration with the Tourism Department to attract tourists.

Last year, the garden was kept closed due to COVID-19.  It is the largest tulip garden in Asia spread over an area of about 30 ha (74 acres). It is situated on the foothills of Zabarwan Range with an overview of Dal Lake. The garden was opened in 2007 with the aim to boost floriculture and tourism in Kashmir Valley.

The garden is built on a sloping ground in a terraced fashion consisting of seven terraces. Apart from tulips, many other species of flowers – hyacinths, daffodils and ranunculus have been added as well.  More green spaces are included in the garden area keeping in mind the comforts of the tourists.

Extra plants like daffodils, hyacinths, narcissus and other ornamental plants are planted to ornate the area.

Water channel running through the terraces will add charm to the garden.

Meanwhile, a senior official said with the opening of the historic Badamwari garden, tulip garden and shikara rides, the government is geared up for a successful spring tourist season.

Recently, the Jammu and Kashmir Tourism department had organised roadshows in different states of the country including Poona, Kolkata, Bengaluru and Jaipur. KINS