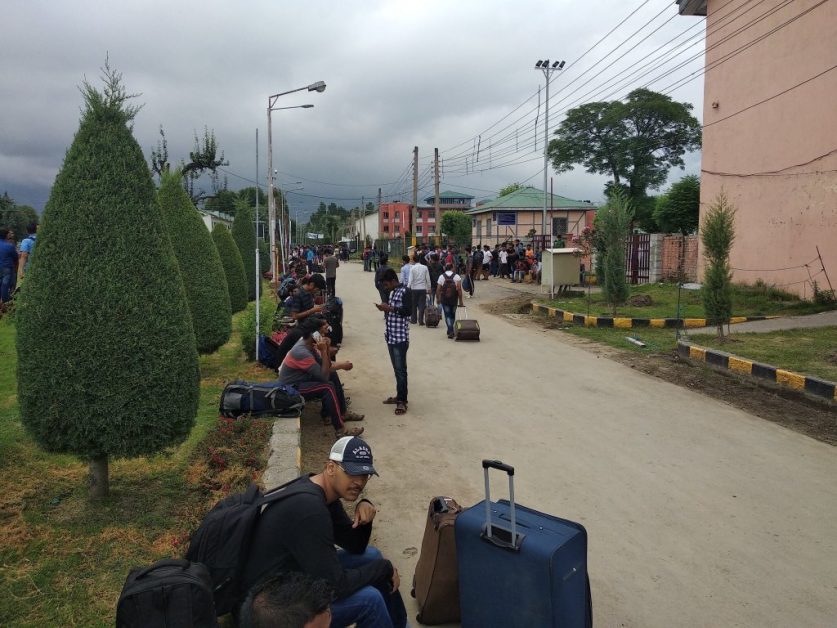 A day after the authorities at the National Institute of Technology (NIT) campus in Srinagar ordered the suspension of classes till further orders, the non-local students began vacating the premises on Saturday morning.

Reports said that as many as 26 JK SRTC buses arrived at the campus early morning to ferry students to Jammu.

“This is for information of all the students of the institute that the classwork for all courses stands suspended till further order. The above notice stands issues in accordance with the instructions received from the District administration Srinagar,” reads an order issued by NIT’s Registrar on Friday evening.

Soon after the NIT order citing “instructions” from district administration, Srinagar Deputy Commissioner Shahid Chaudhary clarified it as “apparently a miscommunication.” “In wake of unstoppable rumours, heads of all the institutions were advised in the day to remain careful. No advise/instructions for shutting down any institution. This NIT notice is apparently a miscommunication,” Chaudhary said on Twitter.

Since early morning, NIT students with their luggage were waiting inside the campus for the busses. “We saw the notification yesterday in our group about the class suspension and buses will arrive here in the morning to take us to Jammu. I am getting frequent calls from my family to come back home immediately,” a civil engineering student at NIT from Andhra Pradesh at the campus said. “

Panic and uncertainty has gripped Kashmir Valley after the government, in an unprecedented move suspended the Amarnath Yatra

Valley is on edge, GOI must clarify situation: Mehbooba

Former chief minister and (Peoples Democratic Party) PDP President Mehbooba Mufti on Saturday said that it is a travesty that the Central government has not made efforts to reach out and clarify on the situation in the state.

“Yet again the valley is on edge. It’s a travesty that Central government hasn’t made efforts to reach out and clarify recent developments,” the (PDP) leader said in a tweet.

She also added that she will meet party workers in Budgam and create awareness about Kashmir’s special constitutional provisions.

Earlier Jammu and Kashmir (J&K) administration asked the Amarnath yatra pilgrims and the tourists to curtail their stay in the Kashmir Valley and leave as soon as possible. Citing a security threat based on the intelligence inputs, the J&K government also called off the Amarnath yatra.

The security advisory to the Amarnath pilgrims and the tourists in the Kashmir Valley read: “Keeping in view the latest intelligence inputs of terror threats, with specific targeting of the Amarnath yatra, and given the prevailing security situation in the Kashmir Valley, in the interest of safety and security of the tourists and Amarnath Yatris, it is advised that they may curtail their stay in the Valley immediately and take necessary measures to return as soon as possible.”

The J&K administration was prompted to curtail the Amarnath yatra after the Indian Army said that Pakistan terrorists were plotting to carry out an attack on the ongoing pilgrimage and that the security forces had recovered a Pakistan Ordnance factory anti-personnel mine from a terror cache.

Several political parties, including the National Conference (NC) and the Peoples Democratic Party (PDP) reacted strongly to the security advisory which, the parties said, has triggered panic and confusion among the Kashmiri locals.

A massive rush of passengers, mostly Amarnath yatris and tourists, is being witnessed at the Srinagar airport after the government asked them to leave Kashmir immediately in view of prevailing “security threats.”

Panic-stricken yatris and tourists were seen jostling and breaking queues outside the airport to take the first flight home.

“There are no special flights. Both yatris and tourists will go in normal private flights scheduled for Saturday,” said a senior security officer at the airport.

In view of the prevailing situation in Kashmir, Air India has decided to give full fee waiver on rescheduling or cancellation of its flights to and from Srinagar till August 15. Some other private airlines are also offering such concessions.

The state government on Friday asked Amarnath yatris and tourists to immediately make necessary arrangements to cut short their stay in the Valley and return as soon as possible in the wake of intelligence inputs of “specific terror threats” to the pilgrimage.

However, this move has triggered panic in the valley, with local politicians seeing it as a move aimed at changing the demography and Muslim majority character of Jammu and Kashmir.

The leaders fear widespread violence in the state in case Article 35A and Article 370, which provide special status to Jammu and Kashmir in the Indian Union is scrapped down. .