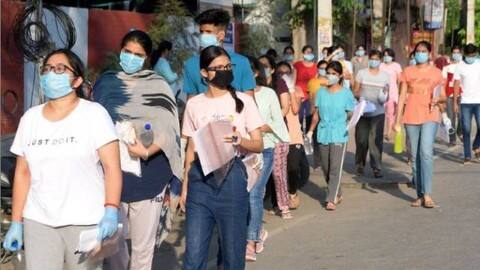 Ground Report | New Delhi: Entrance test central universities; Now for admission to graduation in all the central universities of the country, preference will not be given to grades from class XII. The University Scholarship Commission (UGC) announced this Monday that students will now have to take the Common University Entrance Test (CUET) to be admitted. The universities will have the right to set the minimum grades in the court exam.

On the issue of not giving preference to XII class qualifications, UGC President M Jagadesh Kumar said: “This is not new. For example, JEE qualifications have priority for admission to IITs as they “Different boards have different qualifications. The evaluation method is also different. The same goes for university admissions, so we will take the exam based on an NCIRT syllabus so that everyone can prepare equally.”

Kumar says, “CUET will provide equal opportunity to students who study at different boards across the country, especially those students who come from the Northeast or from rural or remote areas.”

he said that it will be mandatory for all 45 central universities to adopt CUET for admission to their undergraduate courses. However, for postgraduate admissions, universities will have the flexibility to use CUET scores from now on.

UGC President M. Jagadesh Kumar said that it will be mandatory for all 45 central universities to adopt CUET for admission to their undergraduate courses. However, for postgraduate admissions, universities will have the flexibility to use CUET scores from now on.

The government did not favour the use of Board scores for admission due to the “diversity” in assessment methods adopted by different Boards. “Some boards are more generous than others in grading and this gives their students an unfair advantage over others,” Indian Express reported.

The UGC president said the three-and-a-half-hour computer-based entrance test will only have multiple-choice questions based on NCERT textbook content. CUET will essentially have three parts.

Various governments, over the years, have attempted to replace multiple entrance tests with a single one to reduce the burden on applicants for higher education. In fact, even CUET is not new. It had been launched as the Common Central University Entrance Test (CUCET) in 2010 under the UPA-II government, but had not gained momentum as only 14 central universities had adopted it as of last year.

The first part will test a candidate in a language of their choice. This will consist of reading comprehension, vocabulary questions, synonyms and antonyms, among other things. There will be a choice of 13 languages. In addition to taking a compulsory language test (out of 13 languages), a candidate will also have the option to take another test in an additional language from a basket of 19: French, Spanish, German, Nepali, Persian, Italian, Arabic, Sindhi Kashmiri, Konkani, Bodo, Dogri, Maithili, Manipuri, Santhali, Tibetan, Japanese, Russian and Chinese.

The second part of CUET focuses on testing a candidate’s domain-specific knowledge. This section offers a total of 27 domains, and a candidate can choose to have their knowledge tested in at least one and a maximum of six domains. Each central university will specify which domain-specific test a candidate must take for which programme.