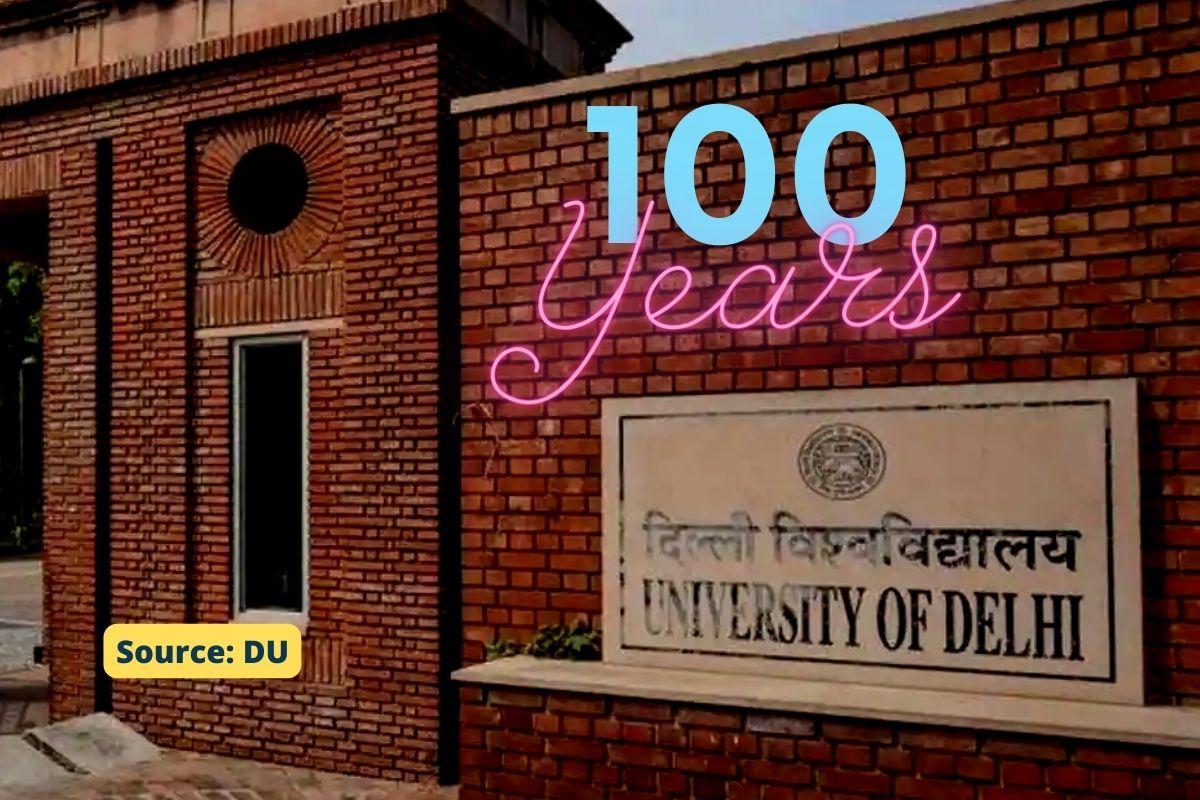 While boarding the rather infamous yellow line of DMRC, especially towards, Samaypur Badli one just can’t help but notice and acknowledge the Vishwavidyalaya station and its very present students – who are almost certainly late for the very lecture they had decided upon attending, last night. Their headphones blaring with music. When they’re in groups, they have the tendency to take the entire coach by storm of their laughter. However, they don’t even seem to be present when they are reading. More often than not these students are embodiment of the Magnum Opus of a university famously referred to as DU that hit the 100 year mark.

Since its rather rocky inception with 750 students in 1922 to 90 colleges, 86 departments and approximately 6 lakh students from all over the nation in 2022, University of Delhi, has made its presence felt.

The Delhi University Bill was proposed in the Imperial Legislative Assembly on January 16, 1922, with the intention of building an integrated teaching and residential university in British India’s capital.

The above colleges were to be the university’s original member colleges. The Assembly passed the bill on February 22, and the Council of States passed it on February 28. On April 6, the Viceroy gave his consent, and the DU Act went into effect on May 1, 1922. Viceroy Lord Reading and Hari Singh Gour were made to be the first Chancellor and Vice-Chancellor of Delhi University.

During its early years and period of transition, the university was housed in rented premises like – the Ritz Cinema, Curzon House on Alipur Road, and a section of the Old Secretariat building. In 1933, it was ultimately given a place in the Viceregal Lodge and Estate overlooking the Ridge, where it finds itself, situated and thriving today.

Sir Maurice Gwyer, who became Vice-Chancellor in 1938 and is named after the university’s oldest men’s dormitory, Gwyer Hall, delivered a memorandum to the Government of India in 1938, describing a vision for the institution to have an all-India character. According to historians,  Gwyer solemnly believed that the university “miniature oxbridge”.

The legacy and story of Delhi University does not end at a validating note of a former Chancellor, its legends hold the essence of solidarity, of social conviction and duty. Students of various colleges of the university have been a crucial part of the independence struggle. DU student politics is known, by people but its roots lay in the most elaborate struggle this country has seen which lead to its very freedom.

DU students have their own story to tell about their involvement to the Indian liberation fight, from shielding Chandra Shekhar Azad to scaling over the walls of limited campuses for spearheading a protest. Students of the university, raised the national flag on campus flagstaffs during the Civil Disobedience Movement instead of the union jack. For their role in the independence struggle, a handful of Ramjas students were arrested and imprisoned. On a memorial beside the college auditorium, their names have been etched. In 1946, a Stephanian named Sameeruddin Khan disrupted the morning assembly, boycotting lessons with 50 to 100 students, by organising a protest march, and removing the Union Jack from the flagstaff. Since, Hindu College had a Students’ Parliament at the time, numerous national leaders, including Mahatma Gandhi, Subhash Chandra Bose, Pt. Jawahar Lal Nehru and Sarojini Naidu found an easier portal for motivating and guiding the nation’s youth.

Indraprastha College for Women (famously known as IP college), being the only womens’ institution, did not back away from their contribution into the ongoing struggle. Dr. Aparana Basu — professor of History at Delhi University — wrote in her book University of Delhi, wrote : “…During the Quit India Movement on 10th August 1942, a vociferous gathering of Hindu College students and ladies from Indraprastha College collected outside Stephens’ and urged Stephanians to join them in a procession to support the Congress leaders who had been jailed the previous day. The crowd marched down Alipur Road, passing enroute IP College, whose authorities had shut the gates to prevent the girls from joining in. They resourcefully jumped down the walls assisted by willing Stephanian hands and the procession continued down Chandini Chowk, shouting slogans…”.  The students of IP college, also started a charkha association, defying their principal’s order.

Students of DU since the independence struggle, till today are found in situations, political or not, that demand their presence. Despite, not being as politically tilted as JNU, the political mobilisation in DU has been multifaceted and dimensional in its core.

Beyond the scholarly and revolutionary, the university has not failed at building a culture that students associate and feel belonged at, the infamous north campus offers in a range, from lush lawns, required readings to iced teas. However, most importantly, it gives the students stories and legends, it gives them the courage to believe that if listened closely, even the walls tell stories, which no one else can find in them to narrate. Beyond the anecdotes of awe and nostalgia lies the undeniable fact that if there’s anything that even remotely represents the Great Indian dream, where the upward mobility of numerous is achieved as an upshot of undergraduate education, the University of Delhi would come up as the pivotal contributor in this nation’s story. The university, above all, has endlessly established and influenced vast student culture and subsequently the culture of the very City of Djinns.