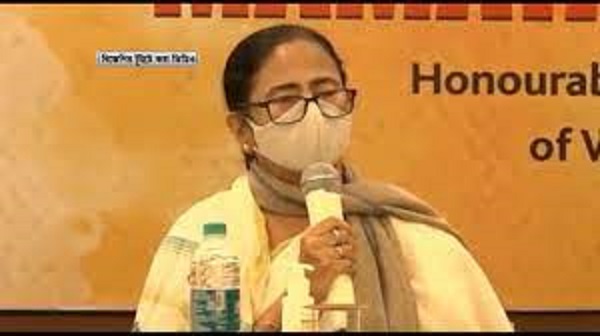 “Mamata Banerjee first sat down, then stood up and stopped singing half the national anthem of India. Today, as a Chief Minister, he has insulted the culture of Bengal, the national anthem and the country, and Gurudev Rabindranath Tagore! West Bengal BJP unit tweeted.

National President of BJP Yuva Morcha, Tejasvi Surya tweeted, “Here we have a Chief Minister, who fails to respect our National Anthem. Expecting the opposition parties to respect Bharat and its values is a lot to ask for these days. This deplorable behavior from a Constitutional Authority is extremely shameful and condemnable.”

“Maharashtra BJP leader Pratik Karpe tweeted, “Isn’t this demeaning National Anthem? What were the so called intellectuals present doing when CM @MamataOfficial started National Anthem in a sitting position. Not only that, then she went ahead and abruptly stopped it in between.”

Meanwhile, a Mumbai BJP leader has filed a police complaint against Mamata for singing in a sitting position and then “suddenly stopping after 4 or 5 verses” to “show complete disrespect towards the national anthem”.

The TMC leader’s statement is in Mumbai during which he met leaders of NCP and Shiv Sena. (Did Mamata insulted the national anthem)

After meeting NCP chief Sharad Pawar on Wednesday, she called for an anti-BJP front and took a jibe at the Congress by calling the United Progressive Alliance (UPA) over. “What is UPA? There is no UPA,” she said.