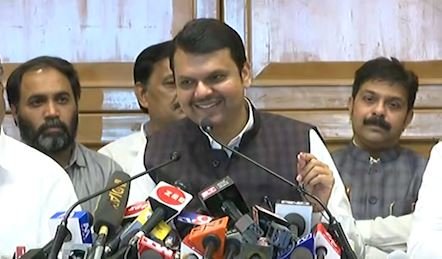 The deadlock over the next government in Maharashtra continued as Devendra Fadnavis resigned and was appointed the acting Chief Minister by the Governor. Fadnavis briefing the media said that there was no decision on equal sharing of the CM post between Shiv Sena and the BJP.

Addressing the media after handing over his resignation to the Governor, Fadnavis said that he ran the government in a transparent manner and “took the state ahead in all development parameters, said Fanavis adding, “I was given the responsibility to serve the people of Maharashtra for the past five years. With the help of people, I’ve successfully been able to undertake a number of projects as far as the work of the airport, metro and development are concerned during my tenure.”

Talking about ending the deadlock, Fadnavis added, “BJP-Shiv Sena mahayuti has managed to gather 160 seats. BJP bagged 105 seats and has been the single largest party in the state. Our strike rate this time has been about 70%. This election mandate is due to our work in the past five years. Unfortunately the day the results came out we received fewer seats.”

Reacting harshly on talks over government formation between the two parties Fadnavis said that the issue of holding CM post for 2.5 years by Shiv Sena had not cropped up earlier. “In the first PC Uddhav Thackeray had said that all his doors for government formation were open. This statement was a setback for us and we had a question on why he said that when we had fought elections together as an alliance.

On the issue of holding CM post for 2.5 years by Shiv Sena, I’m clearly saying this discussion had not cropped up earlier,” Fadnavis added. He further said that the talks were stopped by the Sena and that the BJP was always open to a discussion, “the Shiv Sena did not have time for us but had time for the Congress, NCP against whom we had sought votes and come to power,” he said.

He also attacked Shiv Sena over there criticism of Prime Minister Narendra Modi and said, “The BJP respects Bal Thackeray’s legacy. We have never made statements against Bal or Uddhav Thackeray. In the last few days, the Shiv Sena has sunk low while criticising our leader Narendra Modi. Even the Congress and the NCP have not criticised the PM the way our ally the Sena has done.”

Fadnavis stressed that the next government will be formed by the BJP and apologised to the people for not being able to give the state a new government. “I assure that the BJP will be at the helm of the new dispensation,” Fadnavis said in the media briefing.