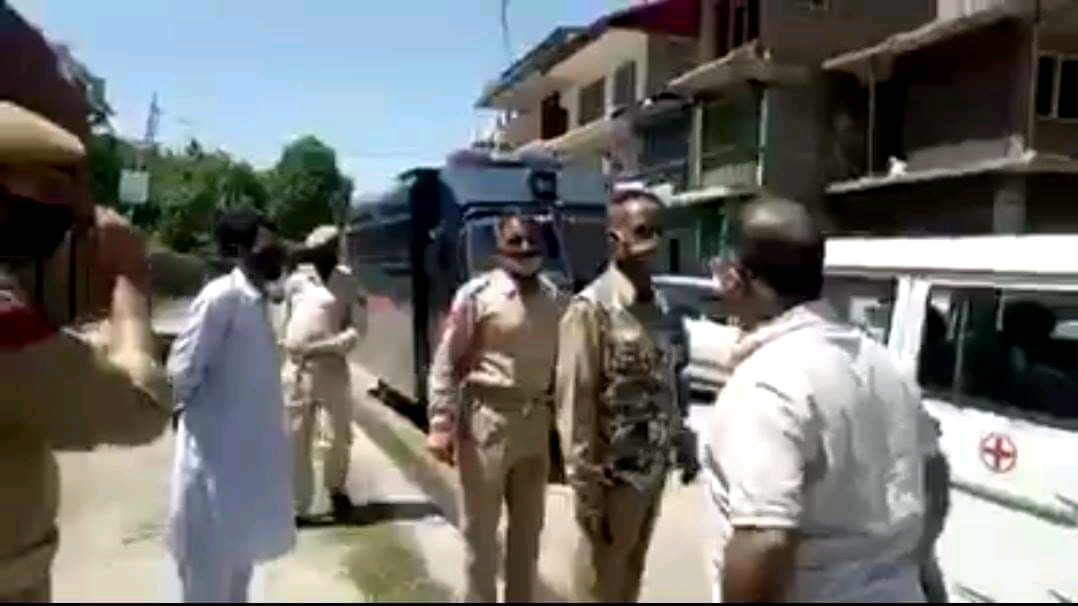 A day after senior cardiologist was allegedly harassed in Srinagar, Chief Medical Officer Bandipora was stopped by Bandipora Police on Tuesday while he was on way to inspect a quarantine centre and sample collection centre in north kashmir’s Bandipora district.

Two videos of the CMO Bandipora Dr Tajamul Hussain shouting at the police personnel posted at a checkpoint in Bandipora district have gone viral on social media.

“I was on way to Chitarnar area sampling site and on official duty. When we reached, near Nasoo, there was a checkpoint, they were not allowing vehicles. My driver approached them and said it is CMO’s vehicle and he begged before them to please let us go. When they didn’t listen, then only I came down and shouted and screamed,” Tajamul said.

Don’t you know we are playing with our lives for you people and you are stopping us from performing our duties. Yesterday too, you manhandled a doctor in Srinagar city,” CMO while arguing with cops told them.

In a video that is viral as well, CMO can be seen telling the cops can’t they see the vehicle belongs to Health Department.

Tajamul was travelling in his official vehicle, on which an emergency light is installed. In the video, he is seen telling the police officials, “We are here to fight coronavirus. Didn’t you see this is health vehicle…this is CMO’s vehicle. You are harassing doctors…,” he said.

Tajamul said that he was allowed to proceed only after the intervention of senior officers. “From the spot, I contacted DM sahib who even told me to make him talk to the cops. They didn’t listen. Then a DySP officer reached to the spot and I was allowed to move,” he said. “I know they are doing the duty and they can check the vehciles, but there are clear instructions from DM that health workers shouldn’t be stopped at all. Isn’t this harassment by the police?”

Eye witnesses said that the official vehicle of Chief Medical Officer Bandipora Dr Tajamul Hussain was stopped near new District Hospital Bandipora complex and was not allegedly allowed to proceed near the Naka laid by Bandipora Police which is preventing people from going to the main market.

Dr Tajamul said that he had to visit the quarantine centres and sample collection centres but he was stopped by the Police near the new complex of District Hospital Bandipora.

He said that he was stopped for about 20 minutes for reasons known to them.

He said that after the intervention of Deputy Commissioner Bandipora Shahbaz Mirza, his official vehicle was allowed to move towards quarantine centre otherwise, the police would not let me go, he said

A video of the incident that also went viral on social media, CMO Bandipora was seen protesting against the incident. The doctor got down from the vehicle and protested against the alleged Police highhandedness. “We are here to fight against corona virus, You are habitual of harassing us,” he yelled at the cops.

However Doctors Association Kashmir (DAK) announced black band protest across Jammu and Kashmir against multiple incidents of doctors being manhandled, harassed and not allowed to reach their duties amid COVID-19 outbreak.

President DAK, Dr Suhial Naik said in a statement that in the past 48 hours, three doctors who were on their duty, were harassed and manhandled by police.

“We are announcing a one-day black band protest on Wednesday (27 May) against the accesses by government forces against the healthcare providers,” he said.

Naik appealed doctors, paramedics, and other related staff of J&K to wear black bands on Wednesday to protest the injustice meted out with the healthcare professionals.

“Unfortunately the law enforcement agencies are violating the rules and regulations and are harassing the doctors which is highly unfortunate,” it said.
General Secretary DAK, Dr Ovais H Dar said that the doctors body is in hand to hand with every doctor across Jammu and Kashmir.

“The three episodes in which doctors were harassed by the government forces need to investigated thoroughly and action should be initiated against those involved in it,” he said.

DAK has expressed serious concern saying that that are fighting the COVID-19 pandemic and unfortunately their colleagues are being harassed and not allowed to perform their professional obligations.

Earlier, the Ministry of Home Affairs, Government of India asked States and Union Territories to provide security to healthcare professionals noting that incidents of violence were reported from different parts of India against healthcare workers.

“But in JK it is reverse. Rather than providing security they are harassing, beating, and not allowing doctors to perform their duties,” it said adding that GoI guidelines need to be implemented.

DAK said that at this time, any such incident of violence against healthcare professionals would create a sense of insecurity amongst the entire healthcare community.