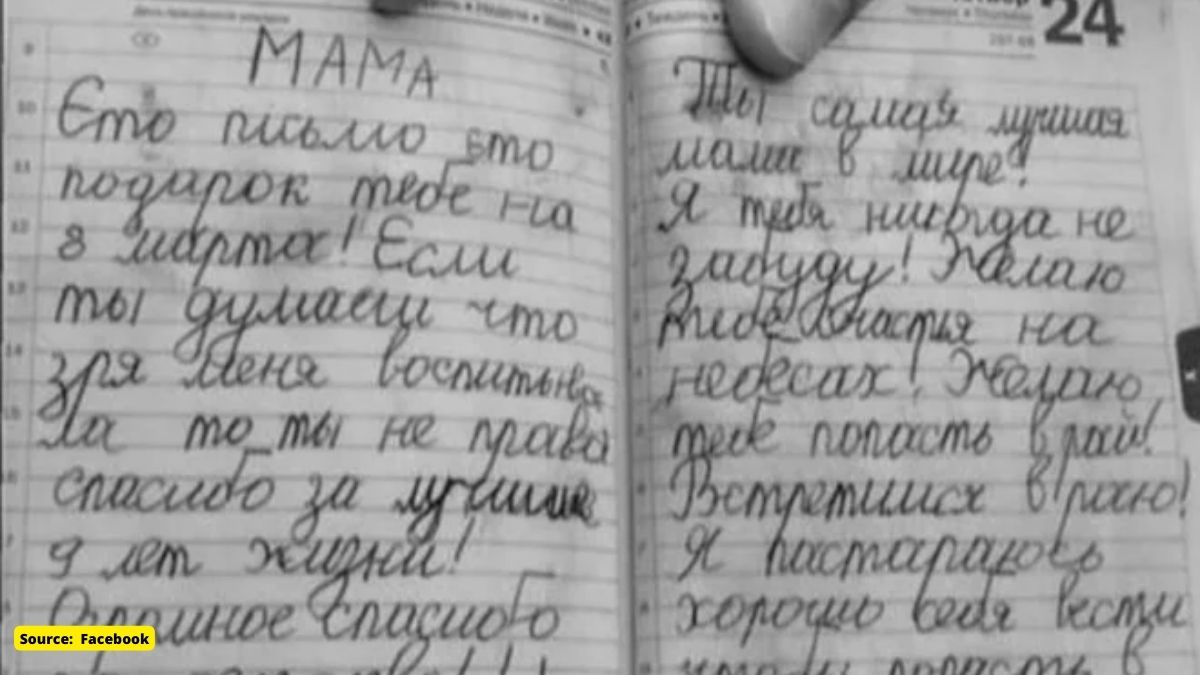 The Ukrainian girl wrote an emotional letter to her dead mother, who was allegedly killed when the Russian fired on their car during the invasion of Ukraine, promising to “meet in heaven.”

“Mother. This letter is a gift to you on March 8. If you think you raised me in vain. Thank you for the best nine years of my life, “the child wrote in her diary.

A photo of the letter written in the magazine was posted on Twitter by Ukrainian politician Anton Gerashchenko. Adviser to the Minister of Internal Affairs of Ukraine wrote: “Here is a letter from a 9-year-old girl to her mother, who died in Borodyanka.”

The President of Ukraine Volodymyr Zelensky stated that the situation in Borodyanka could be even worse than in Bucha, where investigators found at least three places of mass shootings of civilians during the Russian occupation.

It is unknown how the girl’s mother died. A scary note translated by the New York Post reads: “Mom. This letter is a gift for you on March 8. If you think you raised me in vain. Thank you for the best nine years of my life.”

“I am very grateful to you for my childhood. You are the best mother in the world. I will never forget you. I want you to be happy in heaven. I wish you to go to heaven. We will meet in heaven. I will do my best to get to heaven as well.

Ukrainian President Volodymyr Zelensky said in his address late Saturday that Russia’s aggression is not limited to Ukraine, but the whole of Europe is on its target.

During this time, Zelensky called on Western countries to completely impose sanctions on Russia’s energy products, as well as to supply additional weapons to Ukraine.

He said that Russia’s use of force is a catastrophe that will ultimately affect everyone. Regarding the mobilization of Russian forces in the eastern part of Ukraine, Zelensky said that Ukraine is ready for the toughest battle.

He said, “It will be a difficult battle. We are confident of our victory. We are ready to fight as well as stop this war through diplomatic means.”

On the other hand, Ukraine’s chief negotiator Mikhailo Podolyak said that President Zelensky will not meet with Russian President Vladimir Putin until Russia is defeated in the war on the eastern side.