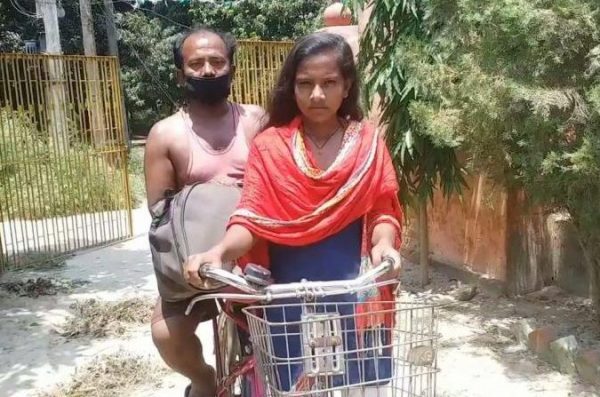 Ground Report | New Delhi: Jyoti Paswan’s father, popularly known as Cycle Girl, died of a heart attack. Jyoti’s father Mohan Paswan had been ill for some time. He breathed his last on Monday morning, after receiving the news of the death of Jyoti’s father, there is an atmosphere of mourning in the whole village. A large number of people have gathered at Jyoti’s house, who are consoling her. Jyoti came into the limelight when during the first wave of covid virus pandemic, she came to her ancestral village Sirhauli from Gurugram on a bicycle with her ailing father Mohan Paswan.

During last year’s lockdown, when the ban on all modes of traffic was imposed, Jyoti decided to go from Gurugram in Haryana to Bihar with the help of her bicycle. Jyoti had traveled about 1,200 km in eight days to reach her village in Darbhanga district. His father was also seriously ill at that time. While Mohan’s wife was taking care of her four younger children in the village, 15-year-old Jyoti was looking after her father in Gurugram.

At the same time, Ivanka Trump, daughter and advisor of former US President Donald Trump, praised Jyoti Kumari while sharing the news. She had said that this beautiful feat of endurance and love has caught the attention of the Indian people and the Cycle Federation.

Ivanka Trump tweeted and said, ’15-year-old Jyoti Kumari reached the village after traveling 1,200 km by sitting her injured father on a bicycle. This beautiful valor of endurance and love has caught the attention of Indians and the Cycling Federation.