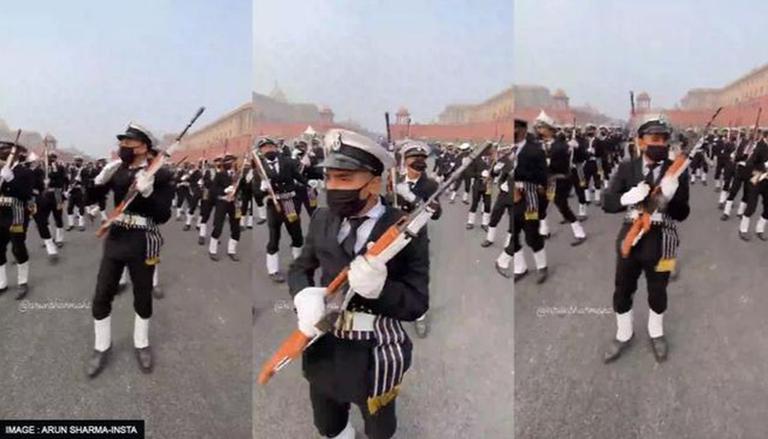 Ground Report | New Delhi: Army Band viral video; Rehearsals for India’s 73rd Republic Day parade on January 26 are in full swing in New Delhi. Like every year, there will be a grand parade showcasing India’s heritage with army marching, daredevil stunts, and paintings from different states.

The clip, shared on Twitter, was posted by the official Indian government handle. In the clip, we see members of the Indian Navy dressed in their uniforms and holding their rifles upright during training at Vijay Chowk, New Delhi.

“What a sight! This video will definitely give you goosebumps! Flag of India Flag of India Are you ready to witness the grand 73rd Republic Day celebrations with us? Register now and book you e-Seat today! https://mygov.in/rd2022 @DefenceMinIndia @AmritMahotsav,” the caption read.

Dressed in Indian Navy uniforms and holding guns, personnel are seen dancing to the tune of the Bollywood song from the movie Once Upon A Time In Mumbai with Rashtrapati Bhavan in the background.

“The Indian government is making its army(?) cadre dance to a song that goes “people get cheated in this world” and proclaiming it a goosebumpy moment….No wonder they jail comedians. They consider them competition,” the Twitter user wrote.

However, another clip fetched positive responses from netizens and some of the users were even left in splits. “Wow wow wow….They sing with their heart. Jai hind…,” commented a user.

On the day, the country marks and celebrates the date when the Constitution of India came into force on 26th January 1950, replacing the Government of India Act (1935) as India’s governing document and thus transforming the nation into a newly formed republic.

The Constitution was adopted by India’s Constituent Assembly on November 26, 1949 and came into force on January 26, 1950 with a democratic system of government, completing the country’s transition to an independent republic.