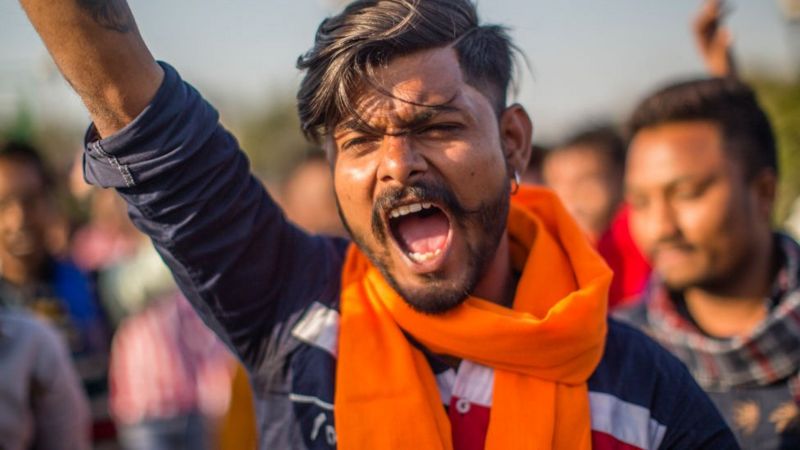 A couple going to register inter-religious marriages in Moradabad in Uttar Pradesh were stopped by Bajrang Dal workers and took them to the police station.

Rashid and his brother Salim were booked and sent to jail under Part-3 of the Uttar Pradesh Laws Against Religion Conversion Prohibition Ordinance-2020.

A video of this incident is becoming quite viral on social media in which Bajrang Dal activists, who are wearing saffron necklace around the neck, are questioning the woman at the Kanth police station.

A worker is asking the woman, “Show us DM permission that you can change your religion.”

The other man asks, “Have you read the new law or not.”

A video recorded at the Kanth police station shows the girl showing a copy of the nikahnama bearing her Muslim name and married to the same customs.

The girl is also showing an advertisement printed in the newspaper as evidence in which she changed her name. In the new law passed in Uttar Pradesh, conversion has been banned for marriage, but this girl is married before the new law comes.

Inspector Ajay Gautam of Kanth Police Station said that a complaint has been filed against Rashid and his brother Salim after the complaint of the girl’s mother. The girl’s mother alleges that Rashid hid her real identity in front of her daughter and he was now pressurizing her daughter to convert.

However, in the viral video, the 22-year-old girl says that she is an adult and she married Rashid five months ago and she came to court to get it registered. It is not clear whether the girl has changed her religion or not.

Through this ordinance which came into effect from 24 November in UP, conversion of marriage done for marriage has been criminalized. It has been made mandatory to get permission from DM first for conversion.