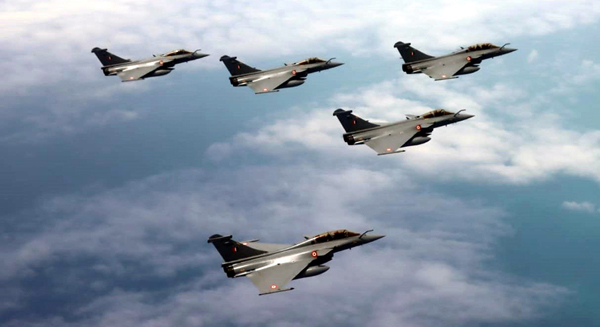 You wanted to learn about Rafale, you turn on the TV, You hear it…hear it again and hear till you forget about absolutely everything else. This is the stage when you are praising how the country has conquered against the odds and surpassed the difficulties. There is no more worry about COVID now, no worry about unemployment, nothing like Social tension can affect the country now. No worries about the international tension. Floods and cyclones seem like some historical problems the country has faced.

Congratulations, the country is one step ahead of the neighboring country. We are talking about the New addition of Rafale jets in the armory of India. When the world was facing COVID pandemic India achieved one of its dream goals: The Rafale Fighter Aircraft.

Which is undoubtedly an important step in terms of national security. But since the deal was finalized with Dassault Aviation, a French aerospace company our media has left no chance to present absolutely anything about the plane. Whether it is about the defense minister’s sharing the same atmosphere with the jet or by counting the numbers of rafale flying in the air. Indian channels have their tactics to engage the audience.

Comparison to the Neighbors

It’s no surprise which nation is our biggest enemy. So the news companies never forget to remind the audience by explaining how the one rafale aircraft is equivalent to two of their most powerful combat aircraft. the blazing graphics and furious music explain to us how the world is ready to bow.

While ignoring the comparison to the countries who already have this technology and even better and deadly armory. Moreover, ignoring the discussion to disseminate how this is going to affect the country’s need in the future and what are the goals we still need to annihilate. Or any other discussion, apart from sensationalizing the topic until it becomes the best thing ever happened.

‘RAFALE’ or Flood relief, Jobs and Health infra? What India need the most?

When it comes to Rafale. National channel are doing no ordinary telecast. They telecasted the complete Pujan of the combat aircraft while it was still in France. From the holy threat tying ceremony to crushing the lemon under rafale’s wheel for good luck. The footage included the perplexing coincidences of Prime Minister and defense minister engaged in cultural ceremonies at the same time.

India is a cultural country. And we present our cultures to the world with pride. But when it comes to the news report there is a step by step explanation and excessive time fillers more than facts.

While the Rafale jet is Aasman ka Sikandar (conquerer of the sky), and Pilots are Vayubali k Bahubali (Muscular conquerors of the conqueror of the sky) our Indian journalism presented the literary creativity.

After a sparkling lines flash on the screen again and again the audience forgets about the news that they were supposed to be watching. The point has been lost and the news bulletin is no less than soap operas telecasted on the channels that come under the same parent company.

Journalism includes covering each and every detail. Including every action of our Heroes and what they are wearing.
How the minister liked the test flight of the aircraft and approves it. How it was a comfortable flight and fun.
The media never misses the aviator the minister is pulling off. No chance of explaining how he shared a joke with the pilot is missed.

And that’s how an official news package is made. Why you should care about all the things but not the facts? It doesn’t matter.  It is okay if the audience was hoping for some facts about the Rafael but got to learn more about the festival where weapons and equipment are celebrated. Moreover, one can even learn about its different names across the country.