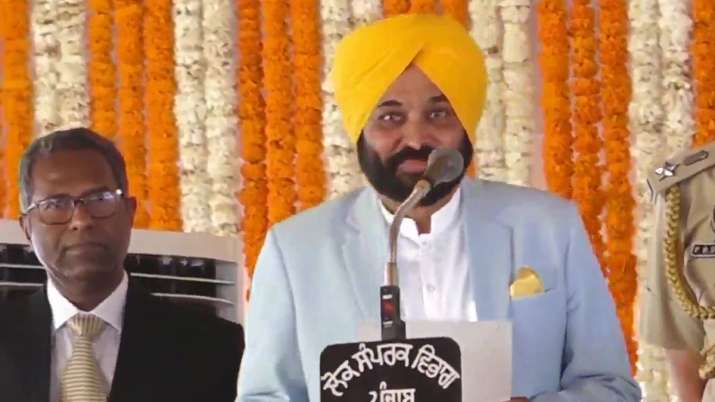 Ground Report | New Delhi: Bhagwant Maan family; Aam Aadmi Party (AAP) leader Bhagwant Mann, who will be sworn in as Punjab’s chief minister on Wednesday, has become the reason for the reunion of a father and son who have been separated for seven years.

Bhagwant Mann is known for his convincing victory in the constituency elections held in Punjab in 2022 when he dethroned Congress after a series of years in office. Bhagwant Mann is a known face in the entertainment industry as he was once a comedian who performed in several shows making audiences love him for his work.

Interestingly, the preparation for this emotional moment was the security arrangements put in place ahead of Mann’s swearing-in ceremony in Bhagat Singh’s Khatkar Kalan village.

Jaswinder Singh, son of Devinder Singh, a resident of Faridkot district ran away from his home seven years ago. Despite strenuous efforts by his family members to find him, he was difficult to locate.

After that, a case was registered at the police station. Since the ceremony was an important event, the police collected information on each individual for verification. Jaswinder was identified as he was setting up chairs at the swearing-in venue.

When ASI Balwinder Singh from Nawanshahr inquired about him at his home, it was revealed that their son left home seven years ago. When the family reached Khatkar Kalan, they met their son. Eventually, Devinder himself picked up his son from the scene and thanked the officers.

Before embarking on his political career, Mann was a comedian, and very popular too. This was before the internet took over the world, but Mann often hit the right note with his comedic timings and performed at youth comedy festivals and varsity competitions. His rustic Punjabi humor tied to political satire made him a popular name, even before he appeared on a popular comedy show on television.

In early 2011, Mann joined the Punjab People’s Party. He contested the constituency of Lehra in 2012 but was disappointed. It was in 2014 that Mann joined the Aam Aadmi Party and contested the elections in the Sangrur Lok Sabha constituency. He won by over 2 lakh votes. But again in 2017, disappointment lurked as in Jalalabad elections he lost the election to Sukhbir Singh Badal.

There have been several controversies surrounding Mann, the main one being allegations of alcoholism. At a public Aam Aadmi party meeting in 2019, with his mother Harpal Kaur at his side, Mann pledged to give up alcohol, promising never to touch it again. Earlier in 2018, Mann – who was the organizer of AAP Punjab – resigned after Arvind Kejriwal issued an unconditional apology to Bikram Singh Majithia over the drug mafia affair.

In 2015, Bhagwant Mann and his wife Inderjeet Kaur filed for divorce. Reportedly, Mann later admitted that he probably couldn’t give time to his family because of his job. Inderjeet also stayed in the United States and Mann said he could not move there, while she could not come to India and they both decided to divorce by mutual consent. they have a son and a daughter.