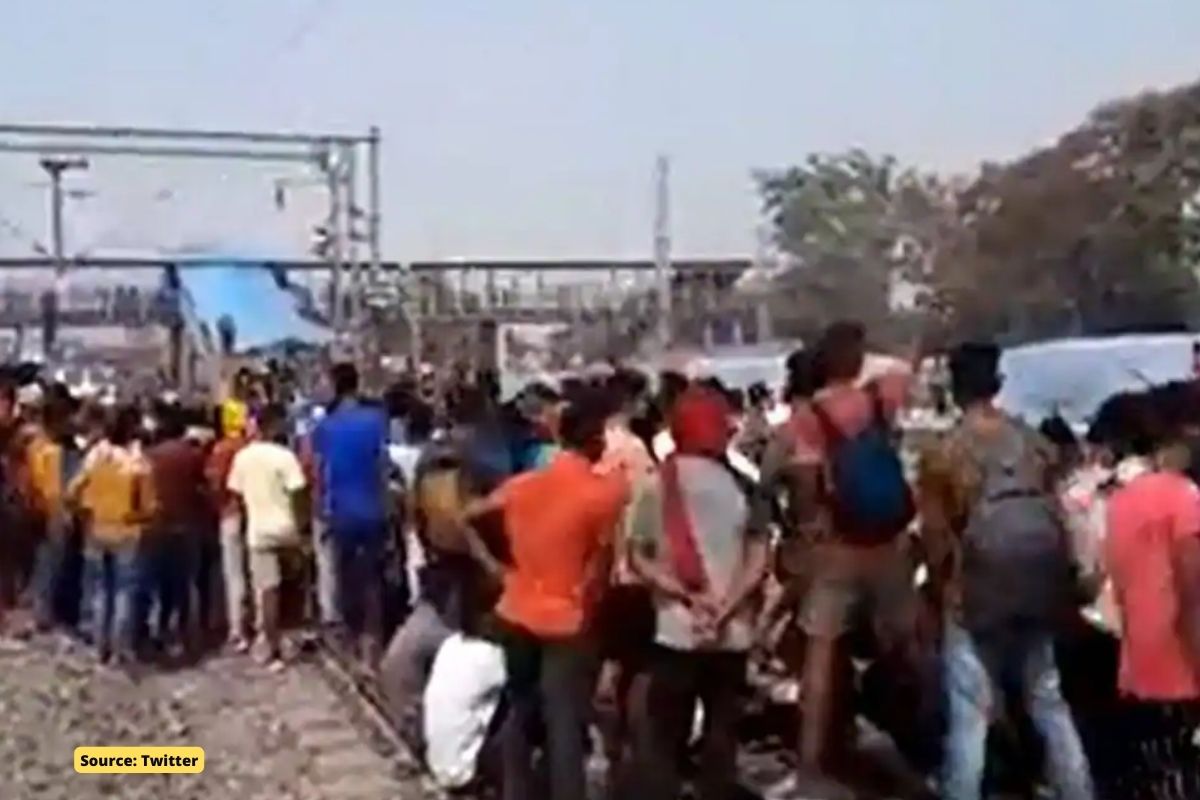 Violent protests continue in many states of the country on Friday against a new recruitment scheme for the Indian Army, Agnipath. Protests against the Agnipath scheme erupted in Uttar Pradesh, Bihar, Haryana and other states, with hundreds of angry army and other candidates burning tires and disrupting rail and road traffic.

Violent protesters also shelled the home of Bihar’s deputy chief minister, Rena Devi. In addition, the house of BJP Chairman Bihar and Lok Chabran MP Sanjay Jaiswal from Western Champaran was also attacked. From Ara in Bihar to Palwal in Haryana, from Agra in Uttar Pradesh to Gwalior and Indore in the BJP-led Madhya Pradesh, hundreds of young candidates for the armed forces took to the streets, venting their anger on the state and private property.

Train traffic was disrupted in Bihar, Uttar Pradesh, Haryana and Telangana, and train cars parked on platforms were set on fire. Due to the possibility of violence, the Haryana government suspended the Internet in Faridabad and Ballabgarh.

On Friday morning, many students arrived at Ballia Station and began destroying trains. Protesters smashed the Ballia-Sealdah Express and Ballia-Lokmanya Terminus Express parked at the station. Violence also occurred at the Secunderabad railway station in Telangana.

Some protesters damaged the train station. Here, too, protesters set fire to two train cars. The CCTV camera is also damaged. In Telangana, the railway connection was also disrupted.

From Bihar, Rajasthan and Uttar Pradesh to Haryana, Himachal Pradesh, Madhya Pradesh, Hyderabad and Uttarakhand, Assam, and West Bengal the opposition to the ‘Agneepath scheme’ related to recruitment in the army continues.

Hundreds of people also gathered in the Secunderabad city to throw stones at the police. Their actions are seen as a sign that protests are spreading across the country.

In the state of Himachal Pradesh, a large number of candidates for the army staged a protest against the scheme at Gaggal Airport on the eve of the visit of Prime Minister Narendra Modi.

Also Read:  Indian Air Force Agneepath Recruitment 2022: Here is how you can apply

What is Agnipath scheme?

Earlier this week, the government launched the Agnipath scheme to recruit soldiers for the army, navy and air force. The main goals of launching this scheme are to reduce the age profile of the armed forces and stop growing pension accounts.

The scheme was launched because more money was spent on salaries and pensions than on the much-needed modernization of the Armed Forces. Under this scheme, young people aged 17.5 to 21 will be recruited directly from educational institutions or through recruiting rallies.

They will be recruited under contract. They will undergo a 6-month regime of rigorous training and 3.5 years of active service. After four years in the armed forces, only 25 per cent of the most active and effective soldiers will offer to continue their service in the armed forces for 15 years. These soldiers will be called the Agniveer. Under the new system, the government plans to recruit about 40,000 troops.

The government will offer generous conditions to those who join the armed forces. In addition to a decent salary, which is reported to be around Rs 40,000 per month during the fourth year of service, the government will also add to the fund a fund that will provide severance pay of around Rs 11 lakh at the time of exit.

The servicemen will deduct about 30 per cent of their salaries into the corps, and the government will pay the same amount. The government will also help soldiers get training credits. The Ministry of Internal Affairs has stated that it will give preference to Agniveer when recruiting to the Central Armed Police.