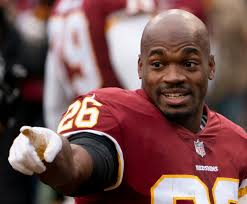 National Football League running back Adrian Peterson was arrested at Los Angeles International Airport on Sunday in connection with an alleged domestic incident that led to a departing flight having to return to the boarding gate.

Police said Peterson, the 2012 NFL Most Valuable Player, was arrested and charged with corporal injury of a spouse. Bail was set at $50,000.

Police were called after a man and woman on board the departing plane got into an altercation on a flight headed for Houston, Texas.

had a verbal argument on the flight

Airport officials said there was a “verbal and physical altercation between a male suspect and a female victim” which led to police taking the male into custody.

The flight was able to return to the gate and the woman and the other passengers later departed for Texas.

A representative for Peterson and his wife, Ashley, said in a statement that the two “had a verbal argument” on the flight.

misunderstanding between husband and wife

Peterson grabbed her wedding ring and scratched her finger, a source close to the Petersons said, and the plane then returned to the gate.

The source said Ashley Peterson was not going to press charges.

“This is a private misunderstanding between husband and wife and we anticipate it will all be resolved shortly,” the Petersons’ representative said in the statement.

In 2014, Peterson was indicted by a grand jury in Texas on charges of reckless or negligent injury to a child that occurred earlier that year. Peterson was charged with felony child abuse in 2014 for using a switch to spank his then-4-year-old son, which resulted in cuts and bruises all over the boy’s body.

Peterson eventually pleaded no contest to a reduced charge of misdemeanor reckless assault. In addition to a two-year probation period, he was fined $4,000 and performed 80 hours of community service. The NFL suspended him for one year.

Peterson, 36, is a free agent after his contract with Seattle expired at the end of the season. Peterson ranks fifth in NFL history with 14,918 career rushing yards. He has said he plans to continue playing next season.